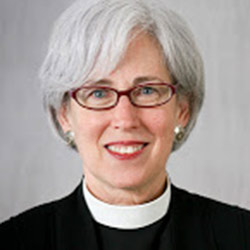 One spring about twenty-five years ago, when my family still lived in Minnesota, I was trying to decide what to give up for Lent. My friends were mostly giving up chocolate or wine. Those choices would have been perfectly appropriate for me too, but I wanted something different that year, so I went to our associate priest to ask his advice. He suggested that instead of giving anything up, I read a book, and what he came up with for me was Mysticism by Evelyn Underhill.

It may help to know that I had only been back at church for a few years, having not attended for about twenty. I knew very little about theology or spirituality. So Mysticism — with its 519-page description of the unitive life, purification, voices and visions and a whole bunch of other words I didn’t understand — might seem like an odd choice, but it turned out to be an inspired suggestion, and Evelyn Underhill became a life-long companion.

I still have that copy of Mysticism. I was fascinated by the lives of the mystics, but what touched me then, and still touches me most deeply, is that while we may not ever experience ecstasy or see visions, Underhill insists that we all have the innate ability to be mystics. We are all created to experience God directly.

Around ten years after reading Mysticism, I spent some time at a Jesuit retreat house in Sedalia, Colorado, mostly lying in a hammock under the trees. Each day I met with my spiritual director, a nun who listened carefully as I told her about my life and tried to see where God was in the midst of it all. For four days Sr. Eleanor said, “Just keep lying in the hammock.”

The last day she said, “I’m going to ask you to pray about what you want,” then left the room to get something for me. In one of those rare instances when an answer pops up immediately (well, yes, I had been lying in a hammock for four days), I heard two things: I want to be a priest and I want to build a house of prayer.

The first didn’t surprise me; I had begun discerning whether to be ordained. The second — the house of prayer — shocked me. I didn’t know where it had come from or what it meant.

I went off to seminary in Berkley, California and was ordained a priest in the Episcopal Church in Western Washington (count about another 4 years), but the house of prayer took much longer to unfold.

In July 2016 Underhill House — a quiet place to pause for prayer — opened on Capitol Hill in Seattle. Our ministry is named in honor of Evelyn Underhill because we believe our vision is congruent with both her life and her teachings. One thing she taught that we really take to heart is that the two most important spiritual practices are prayer and helping the poor.
In the Pacific Northwest the winds split up when they reach the Olympic Mountains and re-converge over Seattle, bringing our rain. We believe that our culture tends to split people apart, and Underhill House desires to be a place of re-convergence, a place where people from all walks of life can be together in a safe way.

Underhill House is a place of hospitality, where spiritually hungry people of all faiths, or no faith, people of means and people of low and no income, those who are home-blessed and home-less are all welcome.
You can slip in, sit down and relax, and leave when you’re ready. You can pray alone or, if you’d like, someone will listen to you for a short time and offer you a prayer.

Contemplation and action. Underhill insists that we need both. Prayer, she says, is the grass roots of change. So that’s our starting place, and the place we return to.

Underhill recommends this: Try to arrange things so that you can have a reasonable bit of quiet every day.

Reasonable, I appreciate that word. What’s reasonable quiet for me can change each day. Sometimes it’s sitting at Underhill House for two hours; sometimes it’s sitting under my blue hydrangea pulling weeds for ten minutes; sometimes it’s taking a deep breath as I drive in heavy traffic. They all can make a difference in my life. If I can remember to be intentional, even the shortest pause can remind me that God is the Source of Love (as Underhill named), something I deeply need within myself.

At Underhill House we’ve been sitting at the edge of our courtyard entrance engaging with our neighbors for the last few months. One Thursday I watched as a young man glided down Republican Street in kind of a slalom fashion. He stopped rather abruptly right in front of me, folded up his scooter, read the sandwich board and asked, “Can I go in there right now?”

“Yes,” I replied, “you can.” He went in, sat for five or ten minutes, then left. I’m not sure, but I thought he seemed to fidget just a bit less. So here’s my question: can we hop off our scooters for a bit of silence every day?

Underhill House: a quiet place to pause. A place to pray, meditate, reflect; a place to make meaning of your life; a place to rest in God and be reminded that you are loved and precious. Then you can go out and be the grass roots of change.

I believe Evelyn Underhill enjoys sitting in the silence with us. I remain grateful for her companionship. Underhill House: practical mysticism!

The Rev. Susan Dean is Executive Director of Underhill House, a ministry of the Episcopal Diocese of Olympia. Visit us in Seattle a half block off Broadway on Republican or at www.underhillhouse.org. We will welcome you!